I needed a change of pace, so in honor of some weddings coming up, I decided to create a few wedding cards.

First up, my friend Nicole is getting married in September and her colors are brown and pink so I decided to combine triple time stamping with heat embossing: 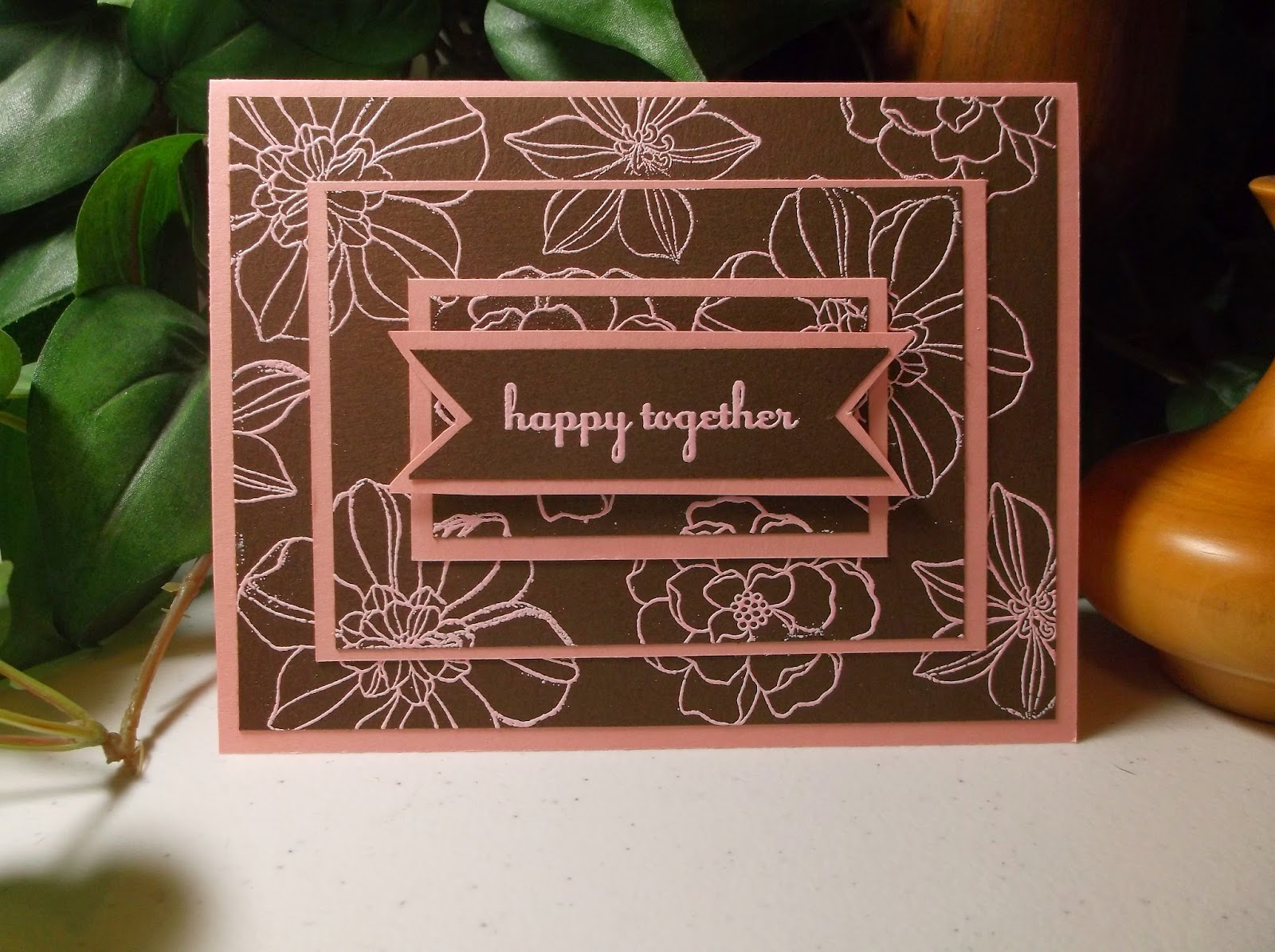 My embossing powder really didn't want to be my friend this morning, so it's a little wonky, but I have plenty of time to redo it if I decide to use this one. (Secret Garden and A Dozen Thoughts stamp sets)

Then I switched gears completely and decided to create one based on the theme of her wedding: country chic. Her concept is sundresses, cowboy boots, and pearls. Fits her perfectly. 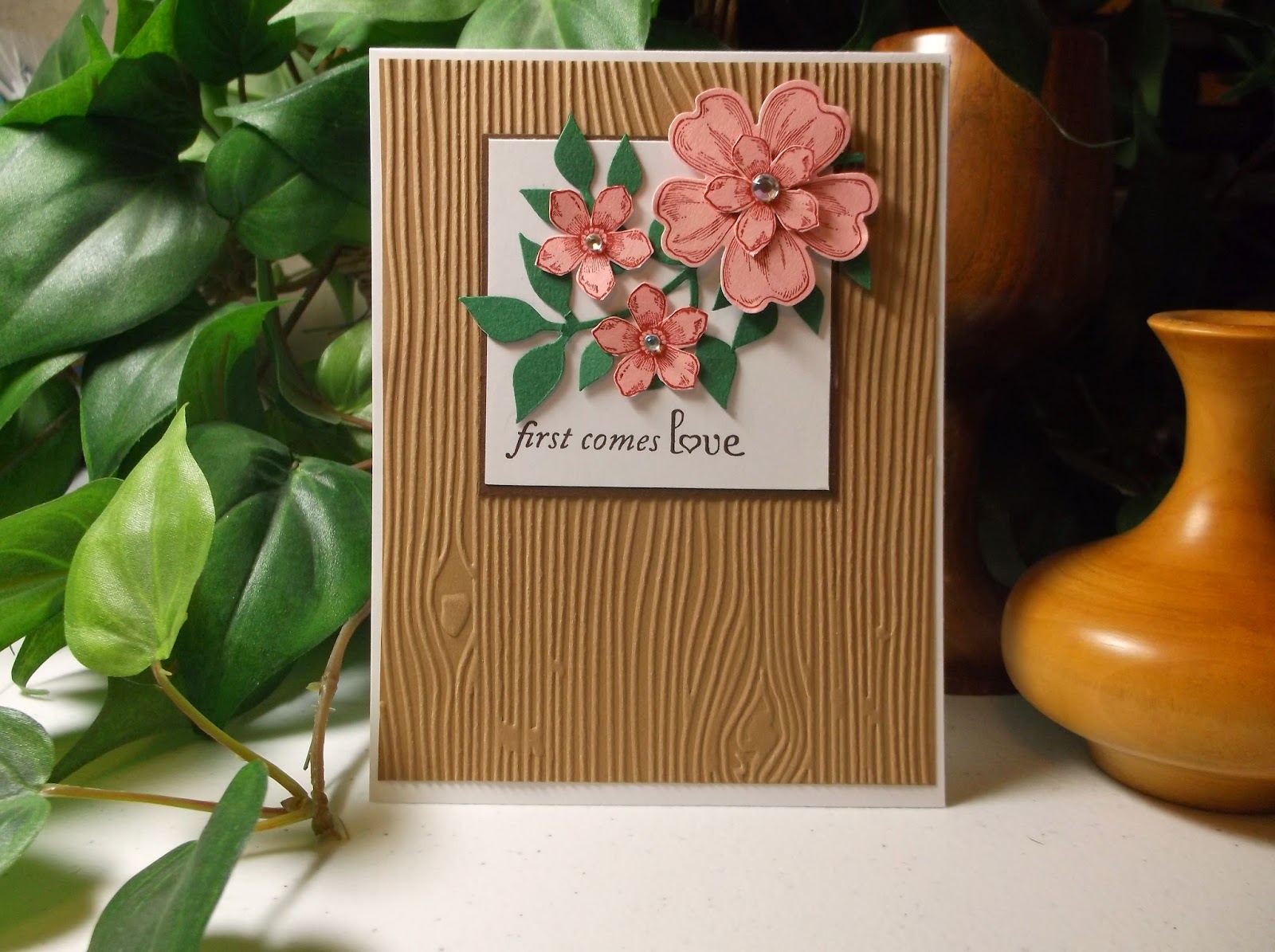 This one just felt a little more country with the woodgrain embossing folder by the Paper Studio. I used Flower Shop and Petite Petals and stamped in Cherry Cobbler on top of some pink scrap paper. The leaves are die cut using my Big Shot and a die from Sizzix. I honestly have no idea where I picked up the sentiment, but I love it! I'm leaning toward using this one for her wedding. Seems to fit her personality a little bit more.

Next up, my friends Roxy and Nik and are getting married in October. (See, still plenty of time to play and change my mind!) 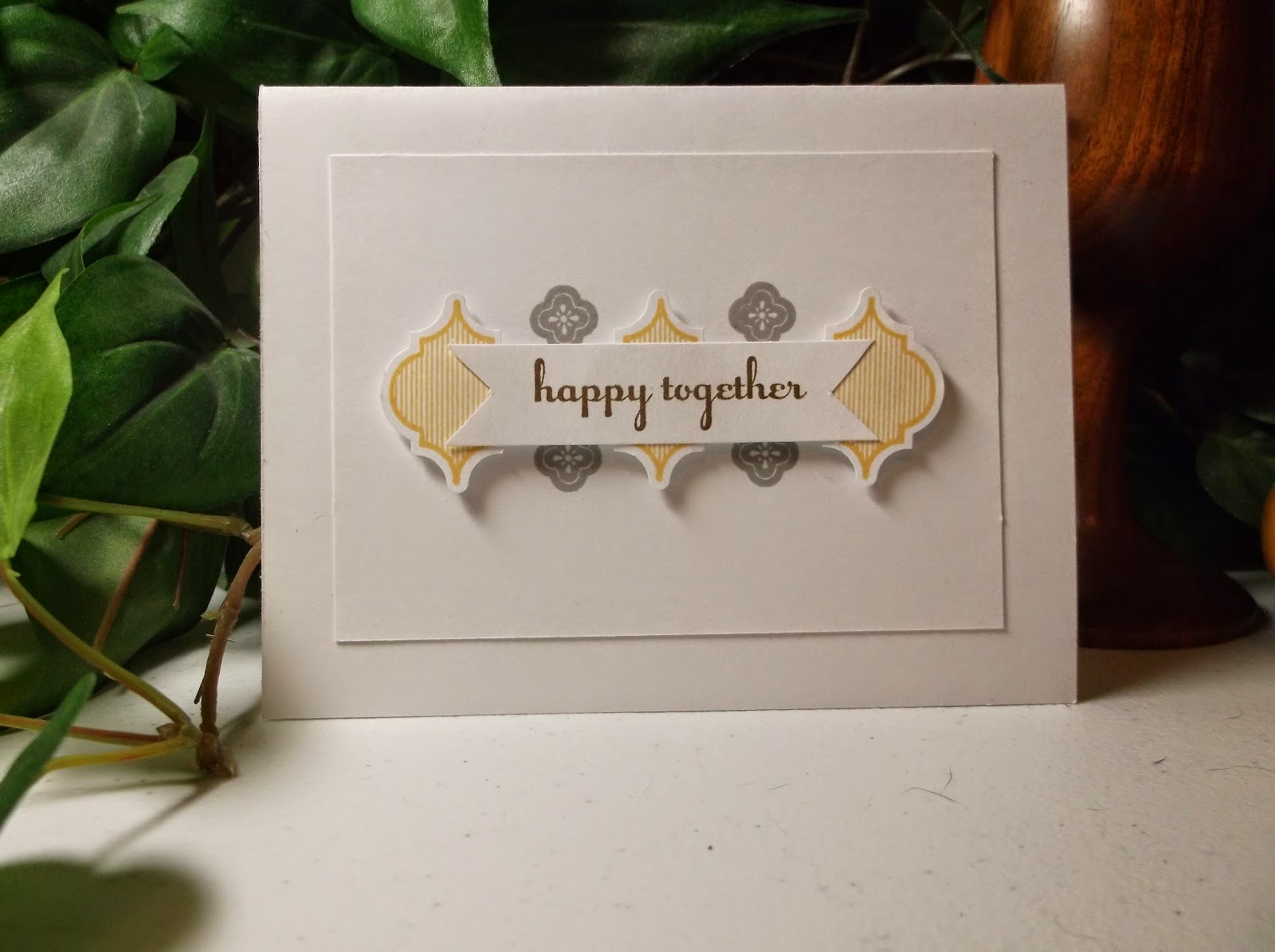 Their wedding is going to be a more formal affair, so I wanted a card that was a little bit more elegant and I always love the white matted on white look. I used mosaic madness and stamped in So Saffron and Smoky Slate. The sentiment is from A Dozen Thoughts and stamped in Chocolate Chip. I like the look of this one, but who knows, I may change my mind later! (Their main color is persimmon, so I may try something with Cajun Craze later to try to incorporate some orange...)

I also wanted to take a moment to say thank you to all the people who've stopped by my blog recently. Your comments are truly heartwarming and it makes me smile to think that others love my cards and maybe take some inspiration from them.  So thank you to all of you!
Posted by Rachel Bergfeld at 9:53 AM No comments:

Email ThisBlogThis!Share to TwitterShare to FacebookShare to Pinterest
Labels: Stampin' Up

Thinking of You Extravaganza

I've had a lot of friends going through some rough patches lately, so I sat down today and made several "Thinking of You" cards. I'm new to the Stampin' Up! family, so I don't have all the papers yet. I made due with some of the things that were already in my stash, so they won't match up exactly (please forgive me!). 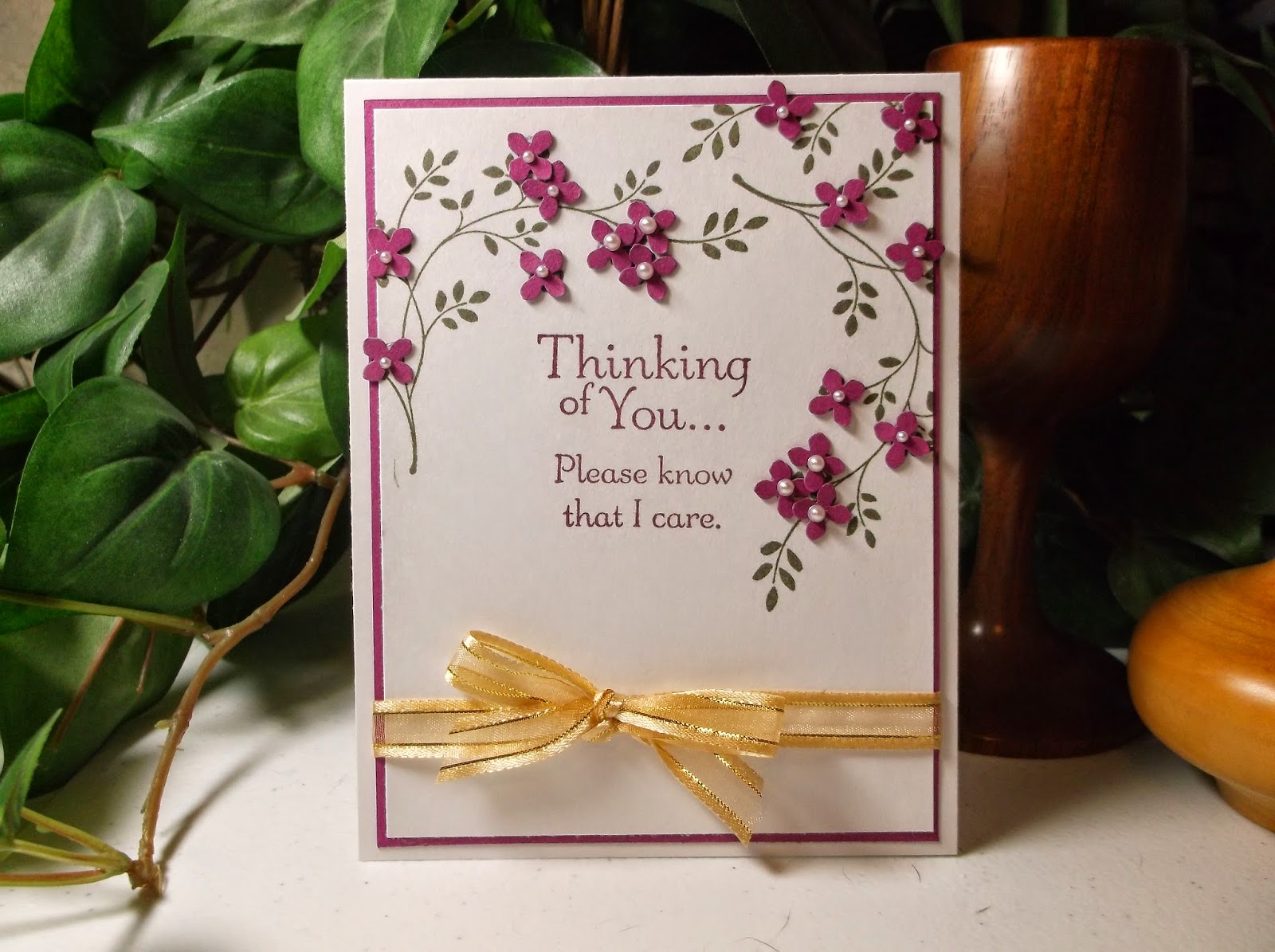 For this card, I used the Thoughts and Prayers stamp set and added some tiny punched flowers using a Martha Stewart punch that I had sitting around. I finished it with a few tiny pearls and a bit of ribbon. The ink colors were Always Artichoke and Rich Razzleberry. 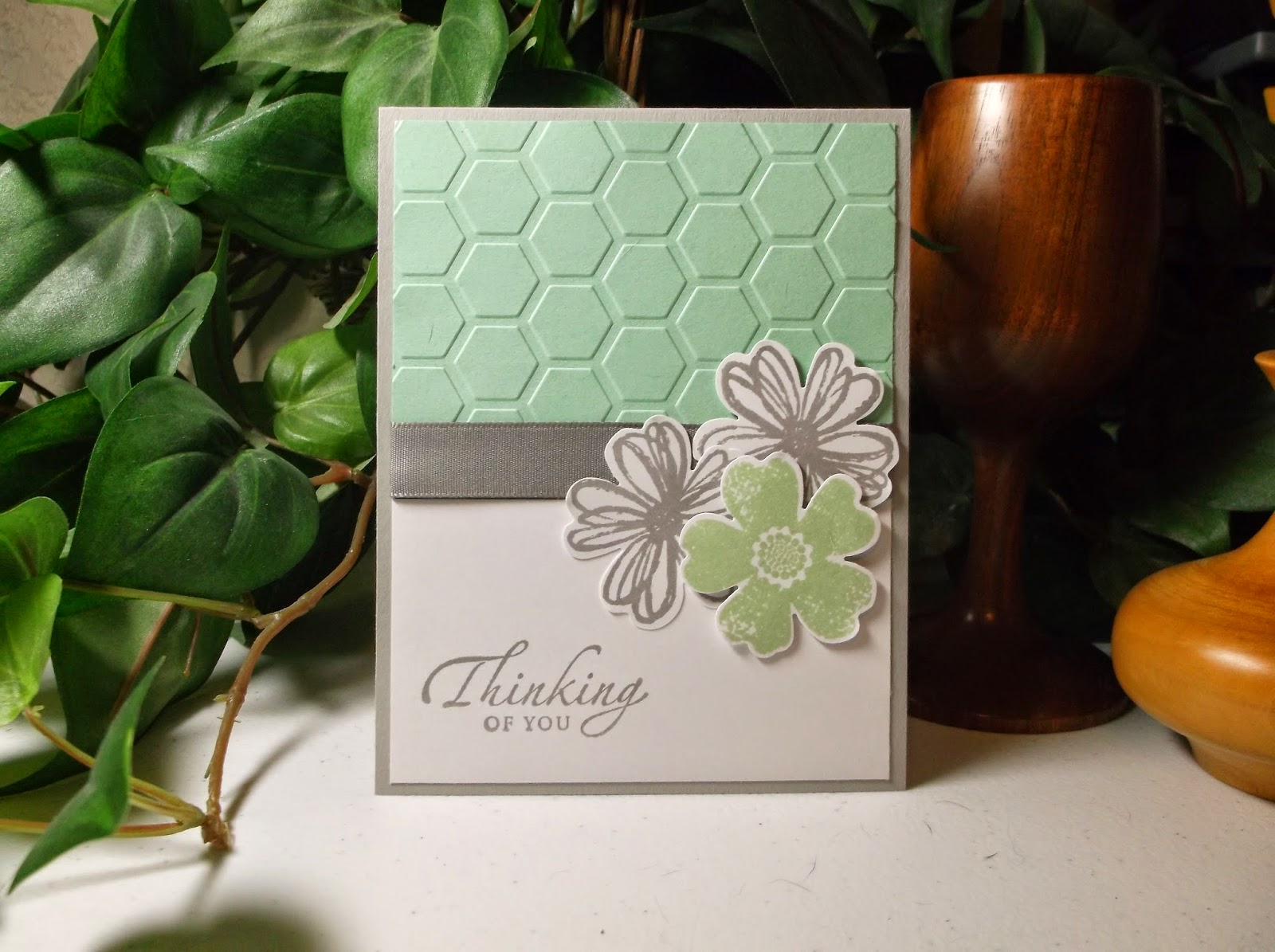 This card was very simple to make and a lot of fun, too! I used my Cuttlebug to emboss some mint green paper I had lying around with a honeycomb pattern and then adhered some ribbon around the bottom. I used Sincere Salutation for my sentiment and Flower Shop for my embellishment. The inks were Pistachio Pudding and Smoky Slate. (Again, sorry for the mismatch, but it's hard to match up colors exactly!) 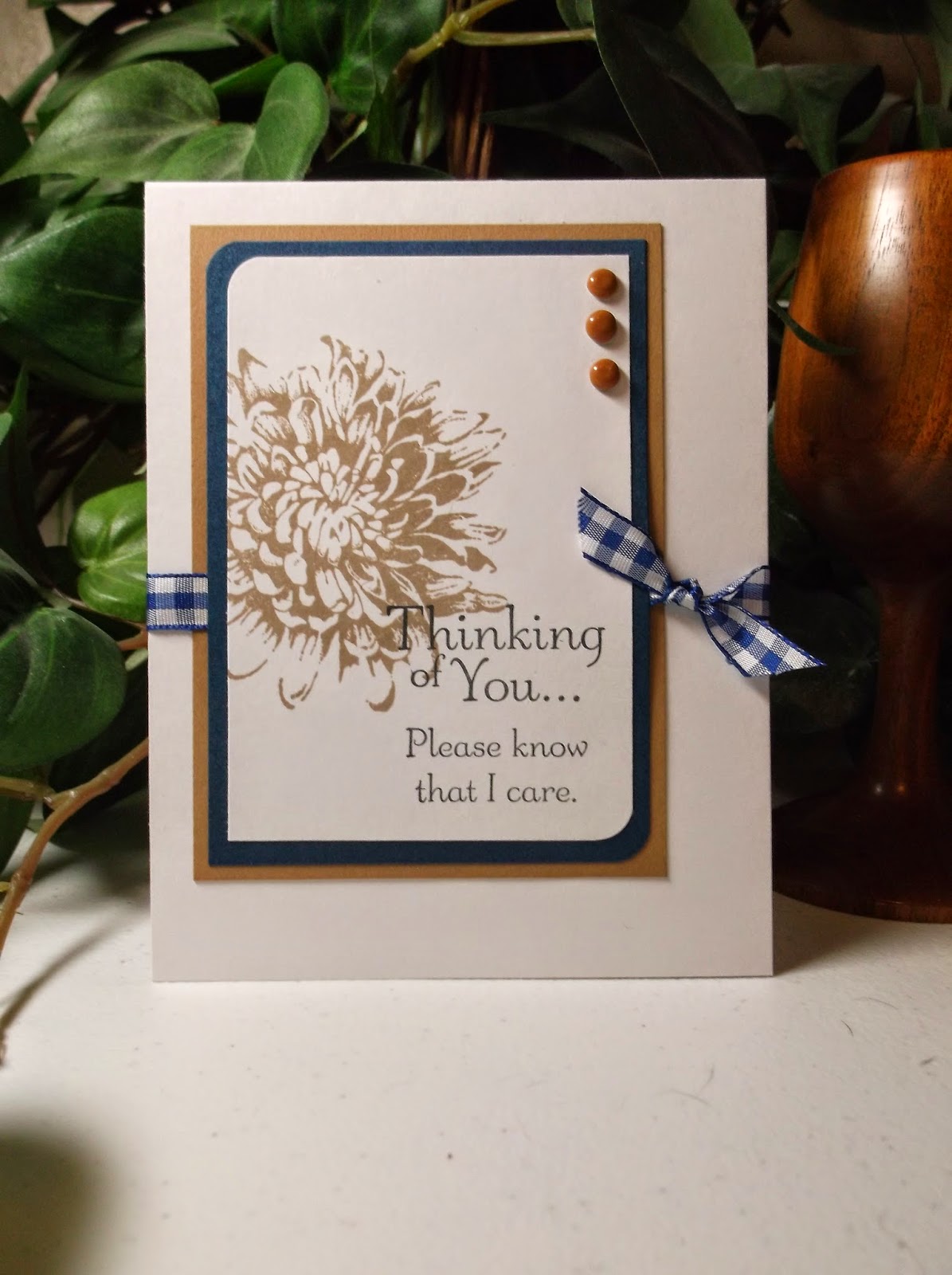 For this card, I used Blooming with Kindness for the flower and Thoughts and Prayers for the sentiment. Inks are Crumb Cake and StazOn Black. All of the papers are random ones from my stash. Those candy dots are actually ones that I made myself from some perler beads! (I've very proud of that!)

I hope to do a 180 tomorrow and make some fun "love" cards. (Everyone needs a little happiness in their life!)
Posted by Rachel Bergfeld at 9:42 AM 3 comments:

Email ThisBlogThis!Share to TwitterShare to FacebookShare to Pinterest
Labels: Stampin' Up

I've been unable to update for a couple of weeks due to some upheaval in my personal life, but that's all settled now....so you have me back!

I've been working on quite a few things recently, so I'm about to bombard you with a bunch of projects. 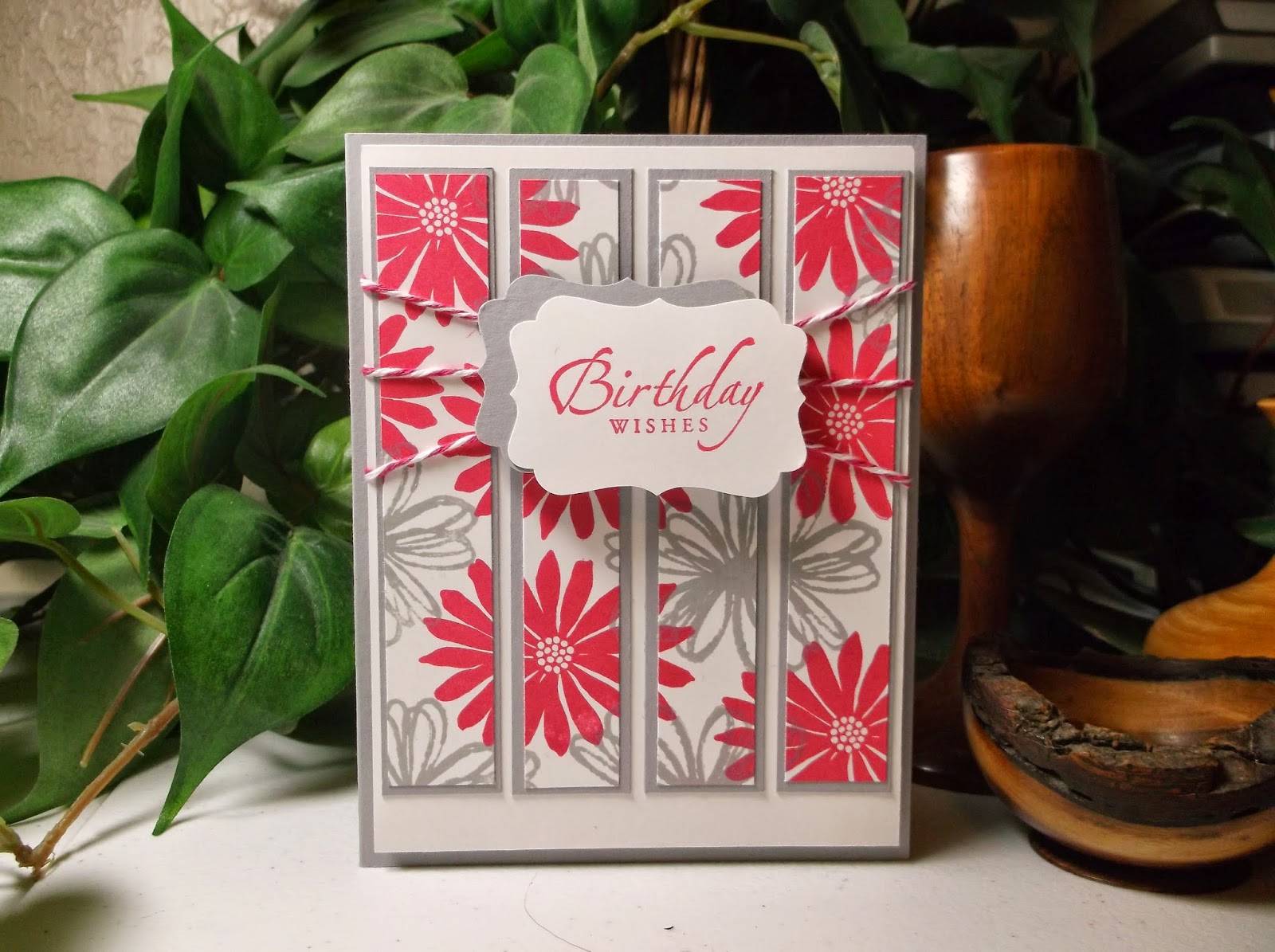 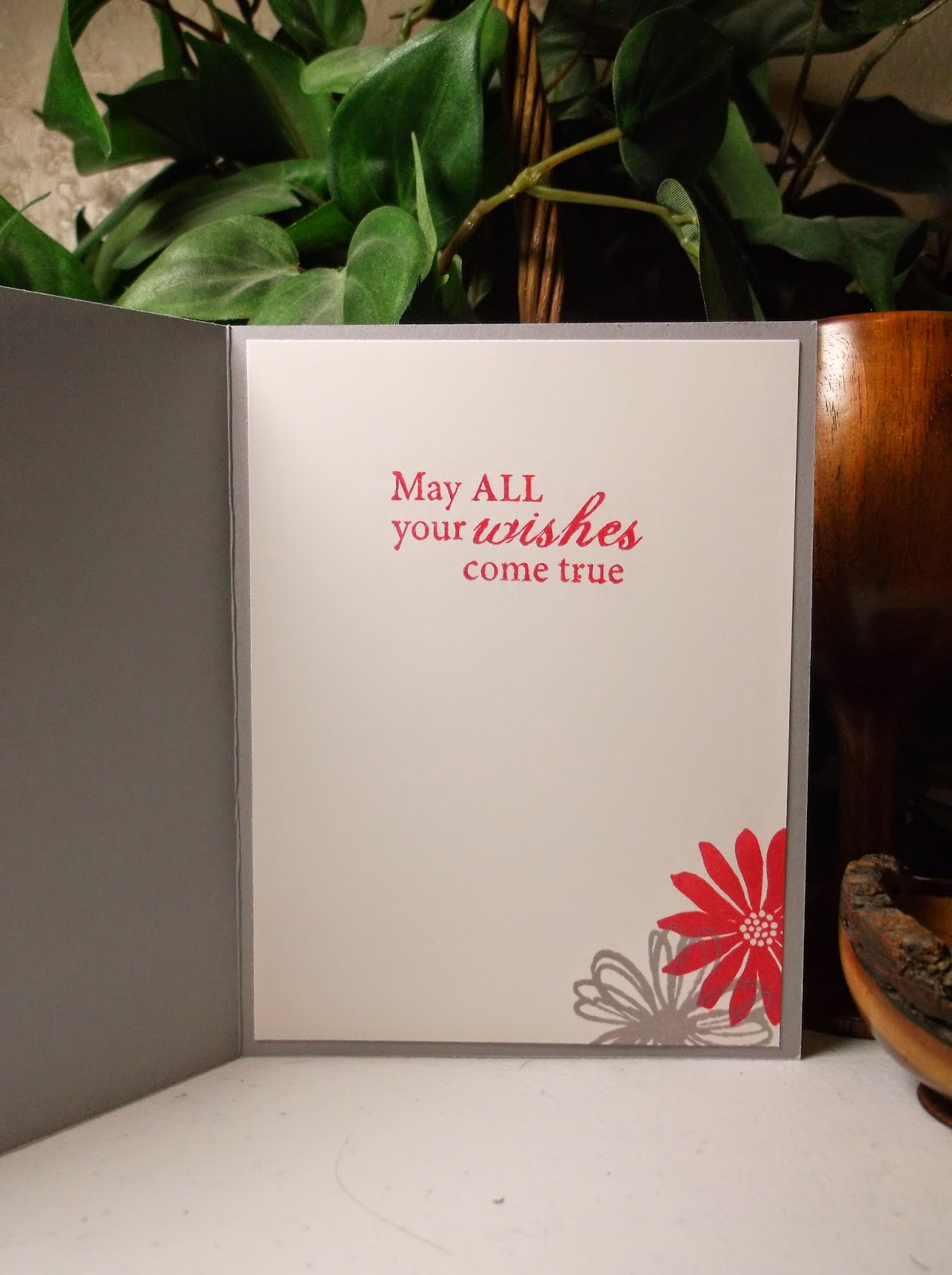 This birthday card is probably my favorite that I've done in a long time. It uses Stampin' Up! paper in Smoky Slate and Whisper White. The inks are Melon Mambo and Smoky Slate. Stamp Sets are Flower Shop, Secret Garden, and Sincere Salutations. I also used the Decorative Label Punch for the front greeting. The inside of the card is a sentiment from the Fiskars Make A Wish Quotes set. For some reason, I just love the color combo! 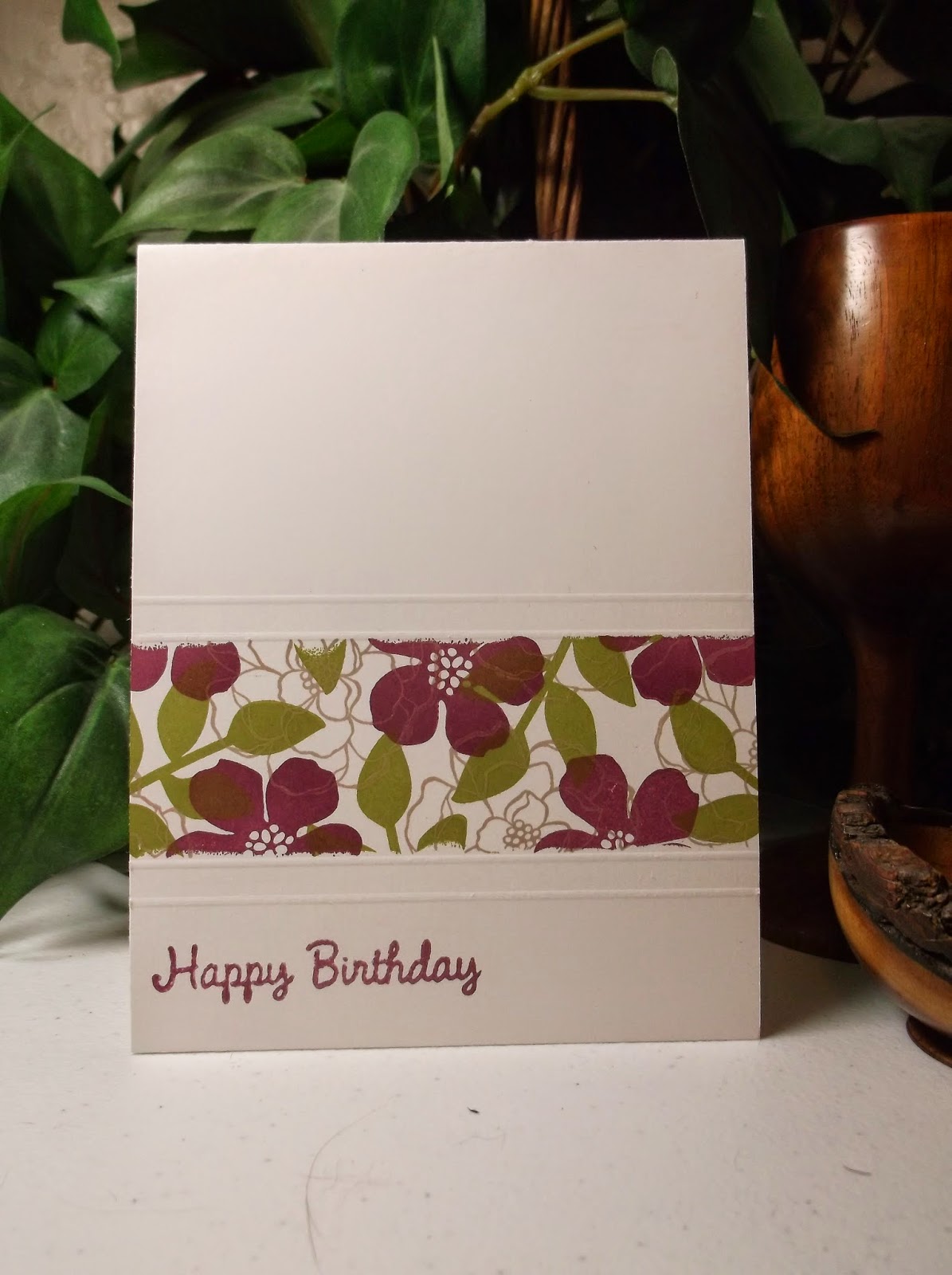 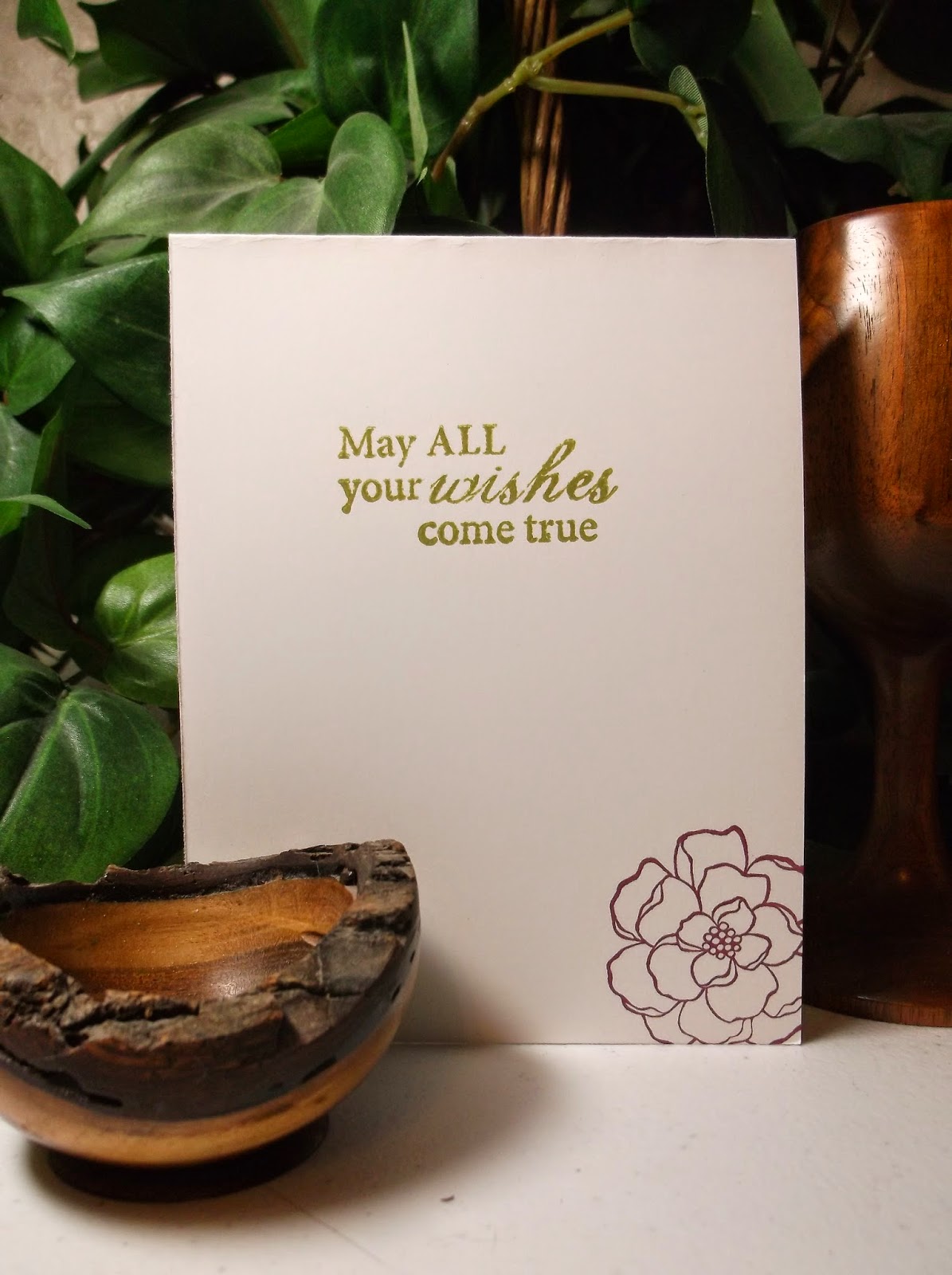 This card features Stampin' Up! Whisper White paper, Rich Razzleberry, Crumb Cake, and Old Olive inks, and the Secret Garden Stamp sets. The sentiments are both from other sets that I had lying around.

I masked a  portion of the card and then just randomly stamped some flowers and leaves in each ink. I then used a scoring tool to add some interest above and below the stamped portion. 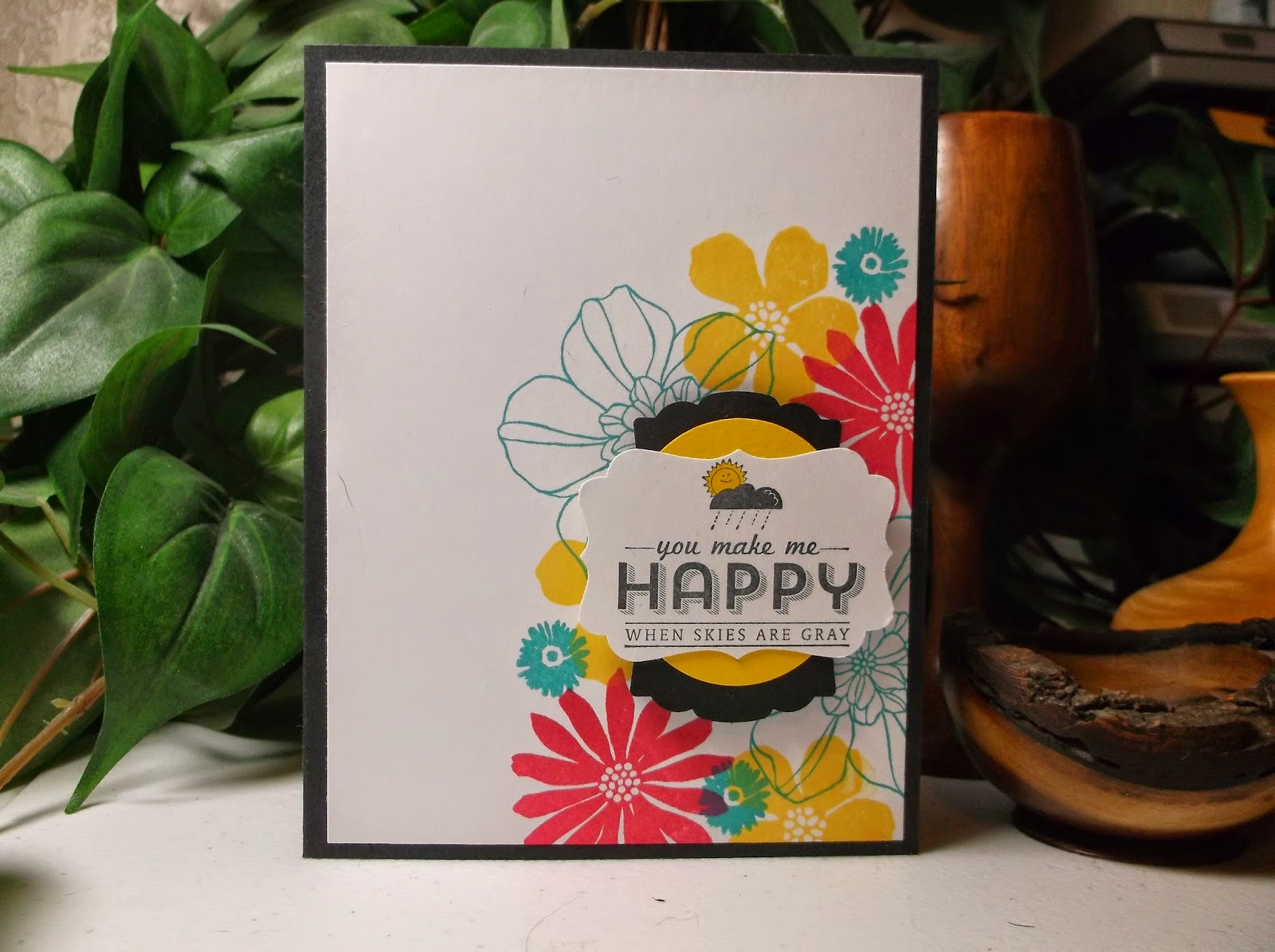 I made this card using old cardstock I had lying around in black and white and a yellow that nearly matched the Daffodil Delight ink from Stampin' Up!. I also used Bermuda Bay and Melon Mambo inks. Again, I used the Secret Garden Stamp Set for the flowers and added a small flower from my stash. The sentiment is from the See Ya Later set by Stampin' Up!. 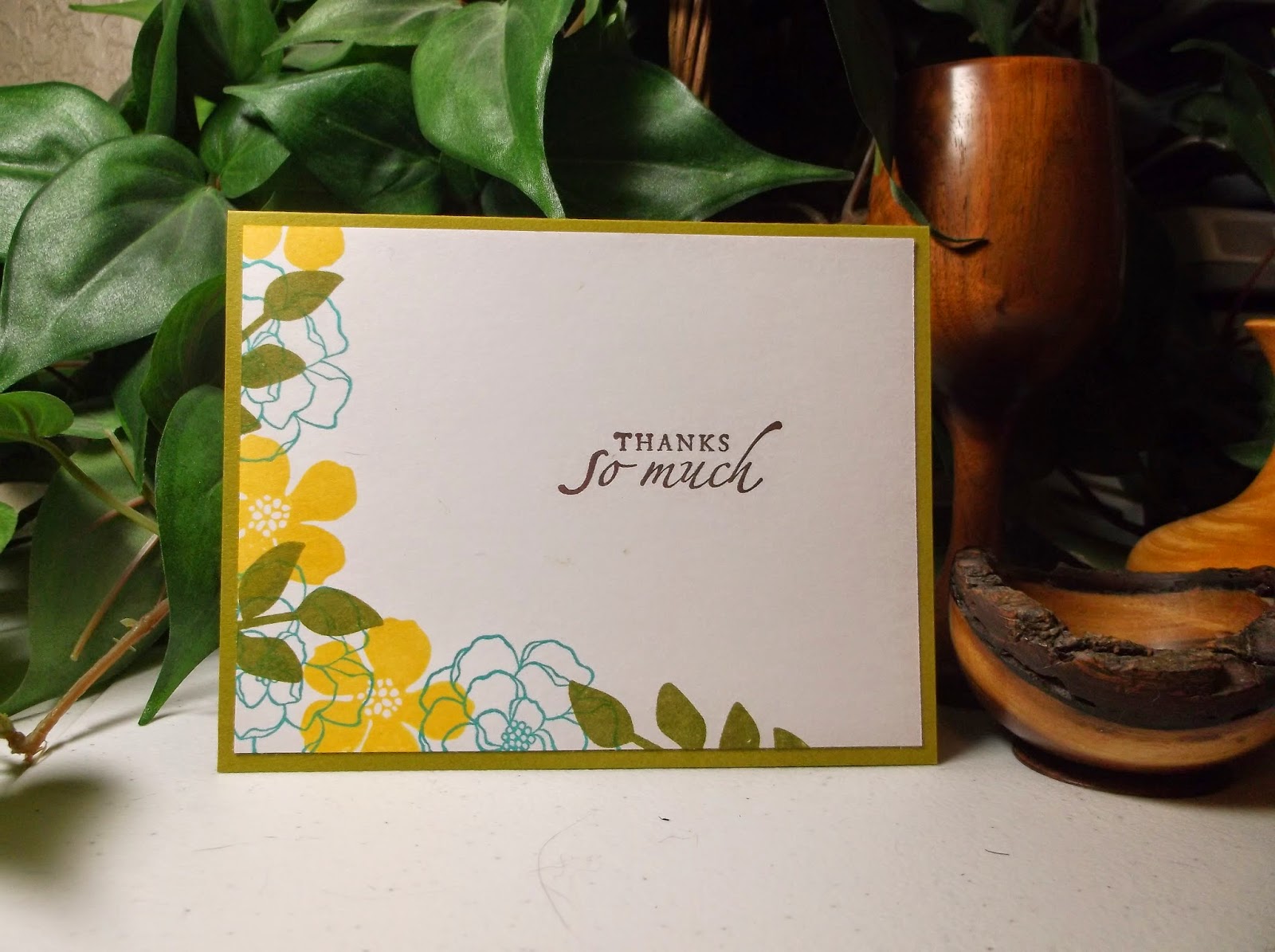 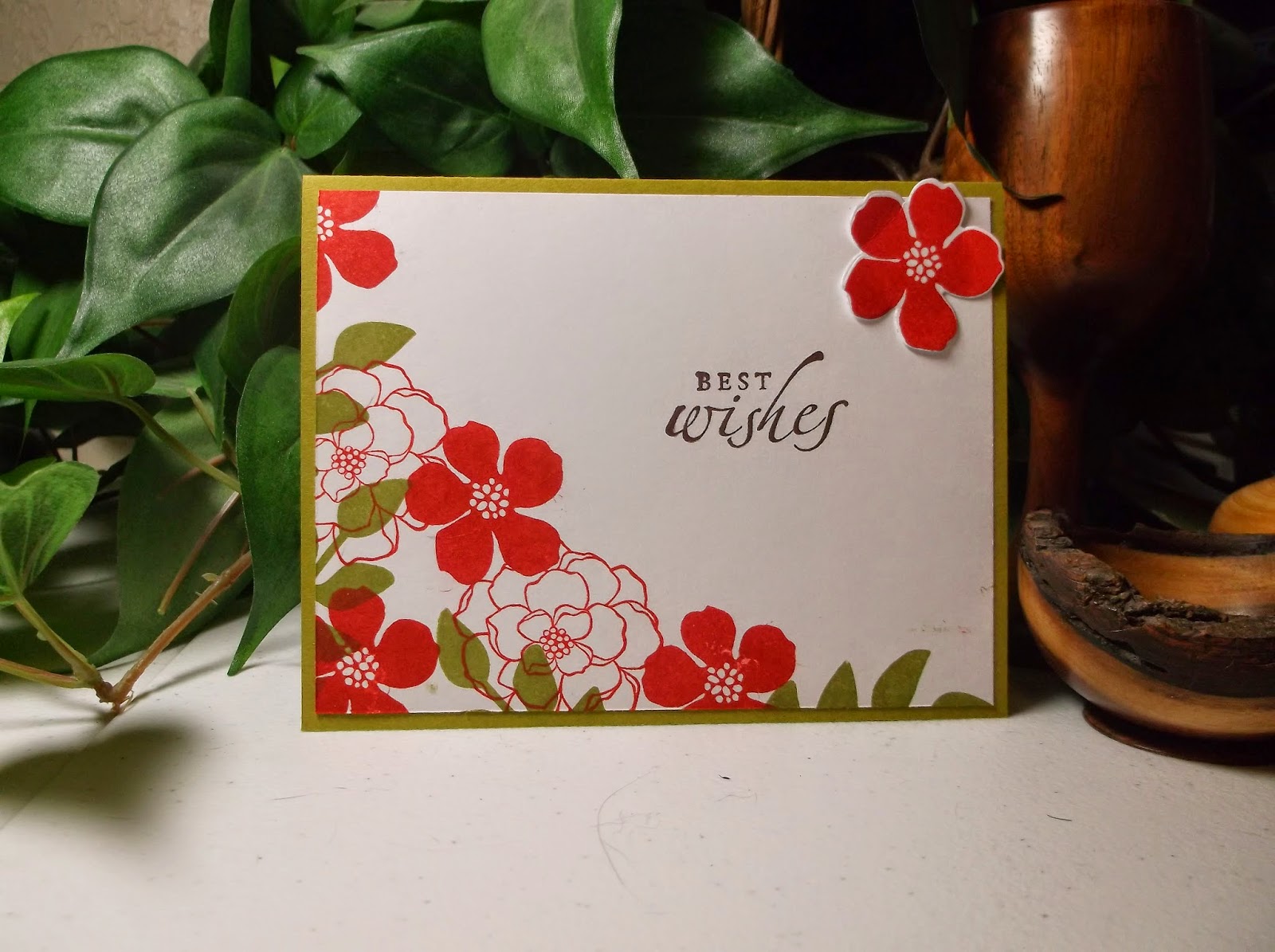 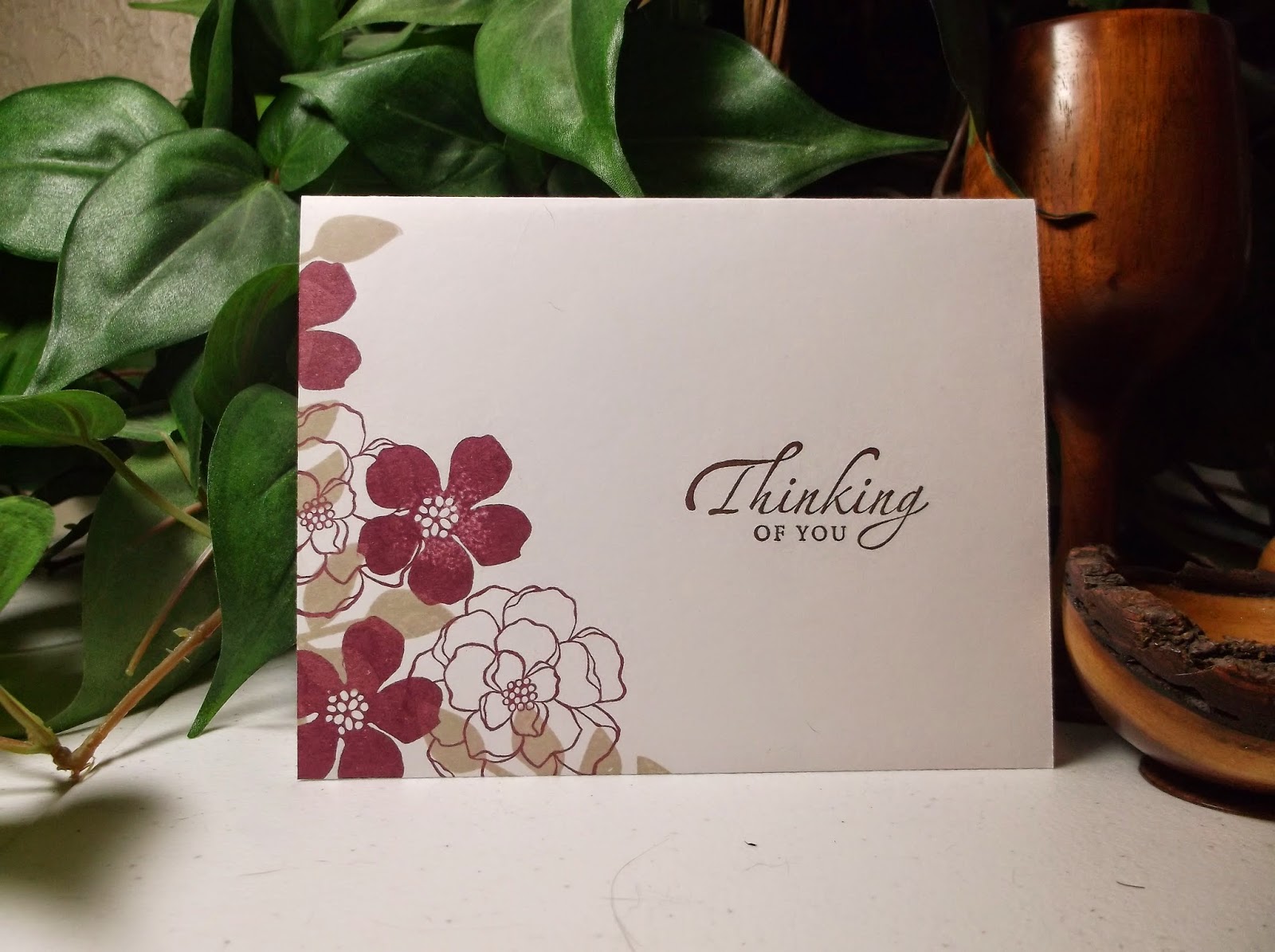 Each of these cards was made with random cardstock from my stash, but I made them at the same time with the same idea in mind. I wanted a simple card that would lay flat in an envelope. Inks featured are Daffodil Delight, Bermuda Bay, Old Olive (card 1); Real Red, Old Olive (card 2), Rich Razzleberry, Sahara Sand (card 3), and Chocolate Chip for each of the sentiments. Again, I used the Secret Garden Stamp set for the images (Geez, I must like that one!). Card 2 has a flower in the top right corner that I used the coordinating die cut set to cut out. Basically, I made an oopsy and needed to cover some ink...! I kind of like it there though.

That's all for now! I hope to back in the  next couple of days with a smaller post (don't want to go too overboard!).